So this was featured on CNN’s website this afternoon and everything about it is how you don’t do journalism. 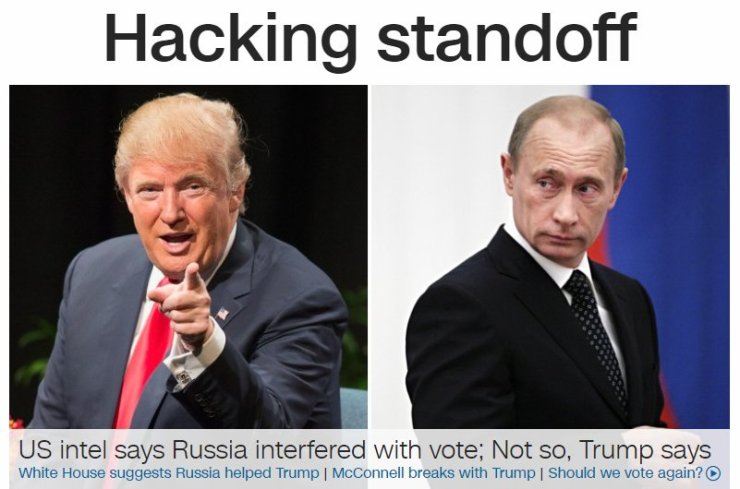 If you’re giving someone who simply benefitted from the alleged hacking an equal voice to the intelligence services that documented what happened, you’re giving an outsized megaphone to someone who has no idea what they’re talking about.

While his remarks on the situation is certainly part of the story, by framing it in this way you’re allowing his unqualified remarks, in this case what amounts to, ‘uh uh’ to stand equal to the investigative power of not only the CIA, but 16 other intelligence agencies.

As with what happened before the election, certain media organizations are simply trumping up a buffoon in the scramble for page views and delivering ad impressions. They know that he’s a polarizing figure who people love or hate, passionately.

Now, take two more examples, from organizations that strive for more accountability in their reporting. 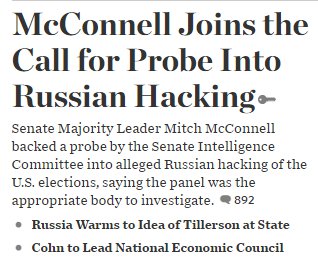 The Wall Street Journal on the right (both literally and politically), and the New York Times on the left. Before we go any further, I know some will argue about where on the political spectrum these two news organizations land, but in our political climate, for a majority of people, the Times skews a little left, and WSJ a little right. And once more for the sake of clarity: I’m a socialist, so they’re both pretty far right as far as I’m concerned, but I’m looking at things from the perspective and conversation being held in mainstream culture.

My point is this: when you see how the piece is featured on each of these two sites, there isn’t a photo. There isn’t an enormous and oversimplified headline. And there isn’t a rebuttal from a person who should never have been consulted.

Why are things being framed this or that way?

Why didn’t the reporter speak to this important person?

Why did the reporter speak to that powerful person and not the people impacted by that person’s decisions?

Call or email reporters (and their editors) and bring up different points of view. They’re professionals, but they don’t know everything. A lot of the time, reporters make errors of ignorance, where lack of familiarity with the depth of an issue caused them to miss something. If you do contact them, be polite, though, you wouldn’t believe how many calls from screamers they get and there’s no better way to have someone tune you out than by screaming at them.

I’m hoping to do more posts about media literacy and navigating the media as Pagans in the future, if this is something you feel would be helpful, please let me know.

In the coming years, being fluent with how to navigate the media will become increasingly more important. And there’s a good deal to be said for what magick can do to help change the conversation that’s happening in the world.